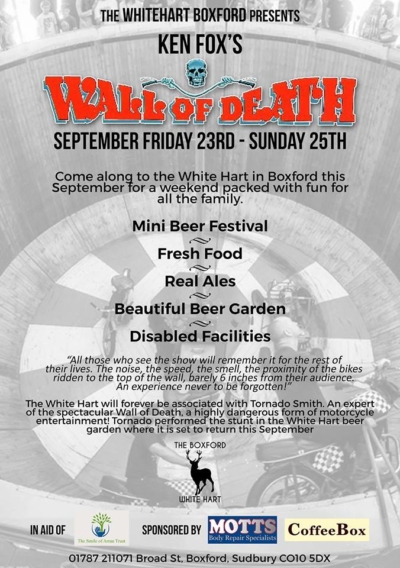 Family fun in Boxford this weekend

We’re happy to be sponsoring the Wall of Death that will feature in this weekend’s family fun at the White Hart, Boxford.

The pub, the Wall of Death, a lion and the village of Boxford have a connection that goes back to the early 1900s thanks to Tornado Smith, the son of the pub’s then landlord.

Smith brought the Wall of Death idea over from the USA in 1929 and his show was unusual because it featured not only a glamorous female motorcycle rider, Marjorie Dare, who rode in the show, but also Smith’s pet lioness, called Briton.

Briton as a cub would sit on the bike’s handlebars during the show, but as she grew older, she would ride in a sidecar.

After her death she was buried under the pub forecourt.

This year the pub is hosting Ken Fox’s Wall of Death from Friday to Sunday September 23-25, along with a mini beer festival.  Why not come along and enjoy the fun.